Father Victor Babu Doss was born in Bangalore in South India, in the State of Karnataka 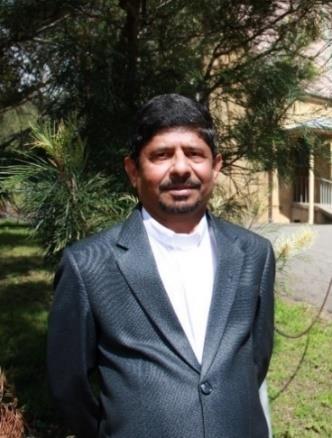 On completing school, Victor joined a Religious Order called the Claretions, the Congregation of Missionaries, Sons of the Immaculate Heart of the Blessed Virgin Mary. Later he left the religious order and joined the mission Diocese of Jhansi, in the state of Uttar Pradesh in North India.

On October 2, 1989 he was ordained Priest and his first appointment was assistant Parish Priest at St Jude’s Shrine, Jhansi. In 1994 he was appointed Youth Director of the Diocese and placed in charge of Jhansi Cathedral. He was then elected as Regional Youth Director of Archdiocese of Agra region, and become a member of the National Executive Body to plan for the National Youth Commission.

In 1999 he completed his Youth Directorship and become Rector of the Minor Seminary (Juniorate) for 3 years. Following this he became the first director of the Diocesan Pastoral Centre and then appointed as the Director of Proclamation. Just to diversify a little, Fr Victor became involved in the Legion of Mary and the Catholic Enquiry Centre (Member of the National Governing Body), Principal of Hindi Medium School, Parish Priest of Our Lady of Perpetual Succourm and Chaplain of St jude’s Hospital…these are all but a snapshot of Fr Victor’s extensive list of accomplishments.

Fr Victor arrived in Australia in 2017 and became assistant Priest in St Benedict, inner city Parish of Newcastle for 20 months. His journey then took him to the Parishes of Taree and Kramback as assistant Priest in the many outlying churches. In late 2019 Fr Victor accepted the appointment of Parish Priest of St James Muswellbrook.

I will instruct you and teach you in the way you should go; I will counsel you with my loving eye on you.
Psalm 32:8
DailyVerses.net
Page load link
Go to Top